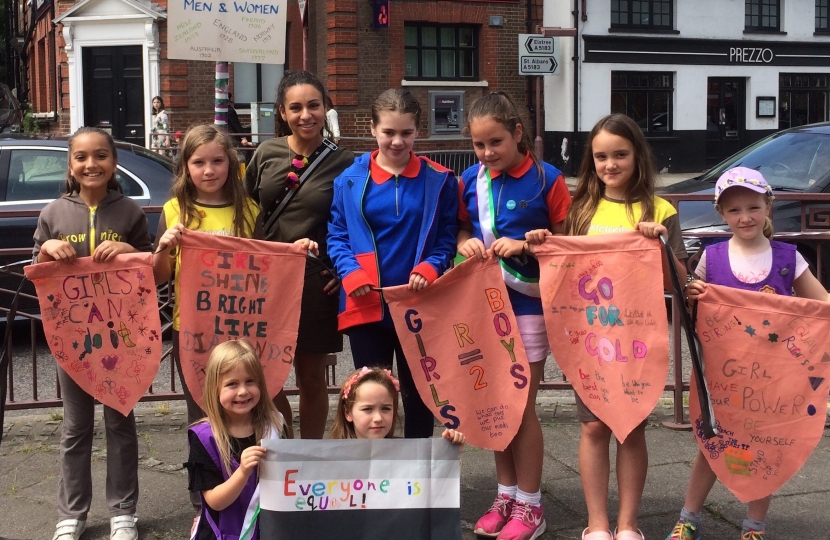 Vote 100 marks the centenary of the Representation of the People Act 1918, which gave all men and some women the vote for the first time. Throughout 2018 Girlguiding are celebrating the impact of the suffrage movement – the pioneering women who campaigned for women’s right to representation and democratic equality.

Girlguiding Radlett District staged a celebration of 100 years of women’s votes in Radlett Village Centre on Saturday 9th June.  Local Conservative Councillor Caroline Clapper joined the young people who have been exploring the acts of the suffragettes during their unit meetings.

Girls displayed the banners they had made; heard stories of courageous, inspirational and influential women; and tried their hand at the Parliament EqualiTeas board game exploring women’s rights, suffrage and current issues facing girls and women. Some extremely willing members were ‘chained’ to the village railings in recognition of the women who had campaigned 100 years before them.  Guide Sarah aged 13 said “I like how people going past the banners showed their appreciation by tooting their horns”.

Councillor Clapper said “This was an absolutely fantastic event. I felt very proud to be standing shoulder to shoulder with the Guides, Brownies and Rainbows, and to see the tremendous support the girls received from the local community. It is so crucial for these young ladies to know about the women who fought so valiantly for the vote 100 years ago, and to understand the difference they made, for future generations, on behalf of all women.”