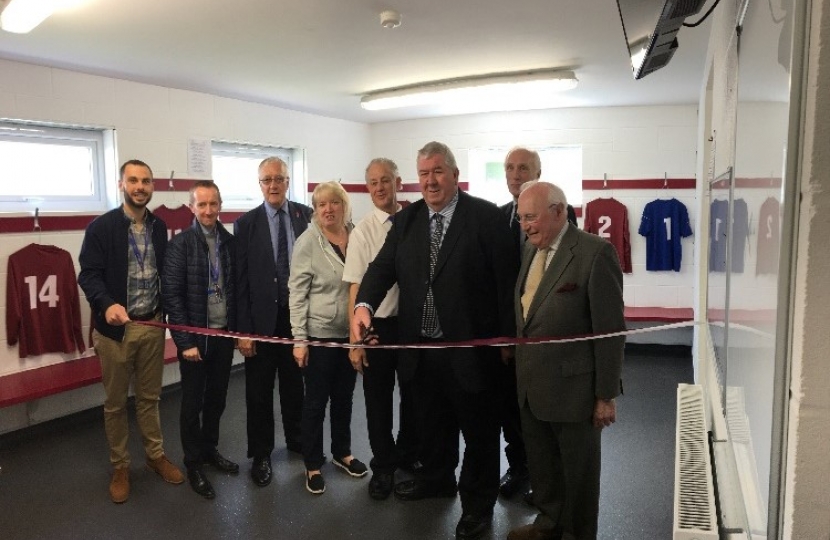 Potters Bar Town FC have improved changing and clubhouse facilities in Hertfordshire with investment from the Premier League, delivered by the Football Stadia Improvement Fund (FSIF).

The grant has allowed Potters Bar Town FC, recently promoted to Step 3 ahead of next season, to provide players and members with: two modern team changing rooms; two changing rooms for match officials; a first aid room; a kitchen and servery area, and a disabled toilet. The remodelling of the clubhouse has also enabled the extension of its existing clubroom area.

The facility completes a ‘double’ ambition for Chairman and President, Peter Waller, who completed 50 years of voluntary service for the club in  September 2017. In that time, he has been involved in taking Potters Bar Town FC from the Herts County League Division 1 to the Isthmian League Premier Division, and is pleased that their players and fans now have a modern, comfortable clubhouse.

The project has replaced old and out-dated player changing rooms, which were originally built in 1982 and were too small to support the club, whilst match officials had to use a temporary cabin. The club have also been able to replace a leaking roof and old boilers, as well as provide better insulation for the building, making it more cost-effective to run.

Potters Bar Town FC’s senior team and youth teams, which range from the Under-12 to Under-18 level, now have safe, comfortable changing provision and social space thanks to the project. For the club, which was originally formed in 1960, this will support the efforts to engage and retain players, as well as encourage new spectators.

The works mean that the club’s home now meets the FA National Ground Grading Criteria Grade D requirements – something that had been a worry for them, prior to the project. The improvements will also benefit other users of the clubhouse. In addition to being available for local youth football clubs, schools and charity matches, the site is used by: Potters Bar Town Youth FC; the Amateur FA and SAL Representative Sides and the Potters Bar Charity Cup.

Peter Waller, Chairman of Potters Bar Town FC, said: “We are indebted to the Football Stadia Improvement Fund and the Premier League, and Sport England's Inspired Facilities Fund, for having the vision to work together on this project and so produce a new building under a new roof, that will be our 'legacy' to the Club, for the next 50 years. Our gratitude is also to Hertsmere Borough Council, Potters Bar Councillors and Hertfordshire County Councillors, for providing financial support.”

Peter McCormick OBE, Chairman of the Football Stadia Improvement Fund, said: “Thanks to investment from the Premier League, the FSIF is able to support projects that improve the experience of players, officials and spectators at lower levels of the game. Potters Bar Town FC’s clubhouse upgrade is an excellent example of how this can be achieved.

“It’s wonderful to hear that the club’s improvement project not only benefits them, by giving players and fans access to more comfortable facilities and meeting the necessary criteria, but will also provide a better venue for other local sides and organisations. I’d like to congratulate Peter Waller and the club for their hard work in making this a reality.”