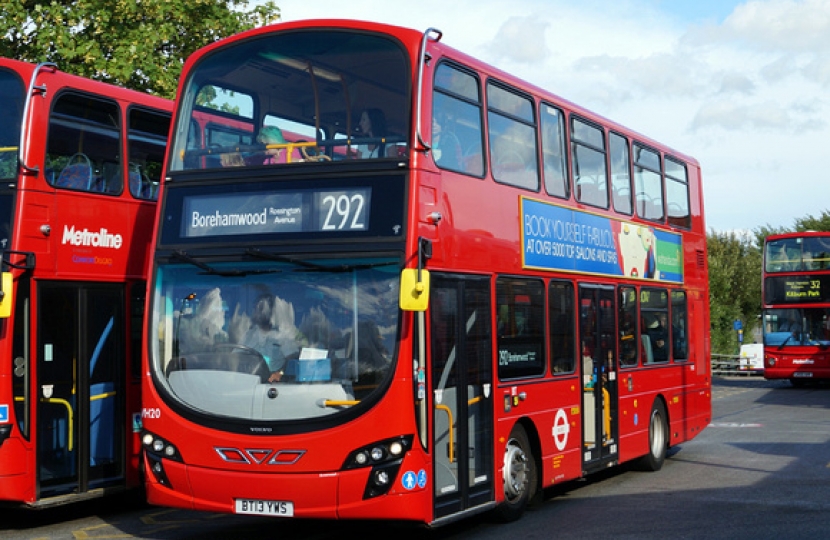 .......by taking part in the TFL public consultation

The Borehamwood Times recently published a story about the proposed cuts to the Borehamwood section of the 292 bus route by Transport for London (TFL).  The Conservative leader, Cllr. Morris Bright, has come under some fire over TFL plans despite the fact that the service is not under Hertsmere Borough Council’s control.

TFL manage one of the largest bus networks in the world with over 9,000 vehicles, 50 bus garages and 19,000 stops. The 292 route, running from Colindale to Borehamwood, is under review along with many other bus routes. To put things into perspective, TFL have proposed cuts which will reduce services from every 15 minutes to every 20 minutes. In other words, a five minute reduction or three busses an hour instead of four.

Whilst any small reduction is regrettable, there are a number of smart apps which we can use to monitor the the exact arrival time of a bus rather than hanging around at a chilly bus stop gazing into the distance as we used to in the “good old days”.  TfL have obviously monitor the usage of the service (through cashless contactless card payments) and have their reasons for reviewing the service. To be fair, whenever I use the 292,  or the 107,  I invariably find they are running almost empty and are not even full during the rush hour.

If the residents of Borehamwood wants to save a bus routes we must make more use of them.  If we continue to use our cars for every journey the bus routes will just die a natural death and we will end up with more traffic on the roads and more polluted air in our lungs.  Sullivan Buses, who run other routes in the area, recently told me that they were running some buses with only one or two passengers! This would not even cover the diesel for the journey.

So what can we do to influence TfL?

Firstly, residents can make their views heard by taking part in a public consultation run by TFL via this link:

Secondly, we can write to TfL to urge them to keep buses going in Borehamwood, which is still expanding.

It is unfortunate that public transport is being cut by TFL at a time when we need more buses on the road to cater for much needed new housing development and to keep cars off the road.

Finally, start using your bus service more often. Riding a bus is much less stressful than driving and you can see a lot more from the top deck! You don’t need an oyster card to pay, just tap in using your contactless debit card. The fares are very reasonable especially when you consider the cost of running a bus costing hundreds of thousands of pounds to purchase and keep on the road.

The 1970s film On The Buses was made in Borehamwood, so let’s keep the tradition of London buses going!