Welcome to the website of the Hertsmere Conservatives. We're an active local group representing local residents, which meets for social and political events and campaigns on behalf of Conservative Councillors and our MP, Oliver Dowden. We're here to help and we want to hear from you, so please don't hesitate to get in touch. 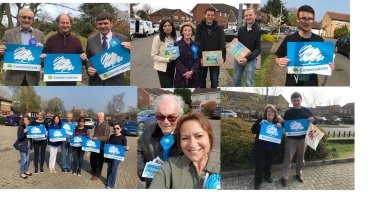 AND THE WINNER IS...... ELSTREE STUDIOS
The Studios pay £1.5 million to the council every year…which pays for local services. That’s the equivalent of 20% of your Hertsmere council tax.
Since the council-run Studios company was created in 2007, Hertsmere has received over £16 million from the Studios - £400 for every single home across the borough.

A  Conservative candidate in the Kenilworth ward of Borehamwood, is…

We're Investing in Infrastructure across our Country

When we came to office we promised to unite and level up, spreading opportunity across the whole United Kingdom.

Watch the Prime Minister's Address to the Nation

Watch the Prime Minister's fireside address to the nation, about our future outside of the European Union, here. Find it here before anywhere else.